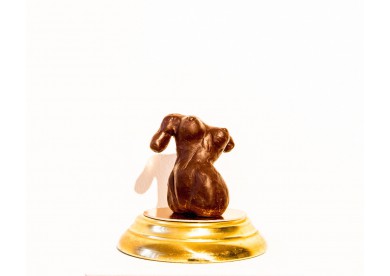 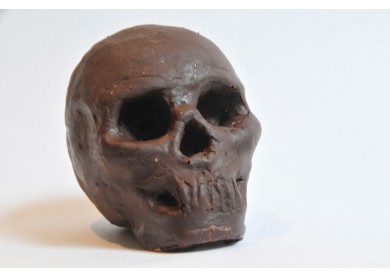 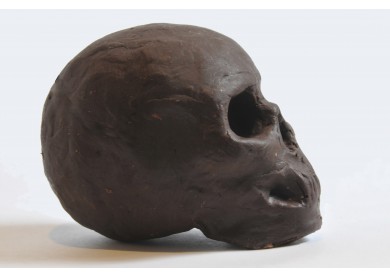 The saga of Amlethus, a viking prince who pretended insanity to deceive his inquitous uncle Feng, so he won’t be victim to assassination like his father, was written down around 1200 by Saxo Grammaticus.

This old legend is better known to us as ‚The Tragedy of Hamlet, Prince of Denmark‘, William Shakespeares’ famous early 16th century drama.
Shakespeare changed the psychological context of his leading character from the original deception aiming revenge carried out by Amlethus towards Feng into the mental survival of Prince Hamlet, who’s father King Hamlet revealed himself to his son in a dream, telling him he was being murdered by his brother, Hamlets uncle Claudius.

The famous scene with Marcellus from which derives one of the most known quotes of this play ‚..something is rotten in the state of Denmark‘ inspired me to this work.
It is about the secrets held inside authorities, about inaction opposed to doing the right thing to prevent harm. So it actually means that the head of the state is rotten and no-one takes action to ameliorate the situation.

I am convinced, that we sometimes ourselves need such a skull in our hands to meditate about our lives, about what might be rotten in our ‚government‘, about what there is to do or where it is better to practise ‚wu wei‘ - doing by non-doing - to achieve improvement.

We also are well advised to be aware that life can end anytime. For this, we do not need to look at the horrific drama happening daily on the Mediterrean Sea with refugees on small boates or what life reality people in war zones have to face, just walking out the door sometimes is enough to become aware that we should appreciate that we are alive and be grateful about what we have, about the basic things in life like family, health, well-being and safety.

My experience with skulls is such, that, no matter which person I have infront of me, a skull makes everyone think about life immediately.

This Amlethus of mine exists in three versions so far:
as a sculpture in bronze, limited to 99 pieces, for your desk or entry hall;
as a white-painted multiple in plaster cast to decorate interiors;
and as a 300g organic and fair traded, handmade chocolate version to share it with friends having a glass of wine and philosophising about life, grating a bit of the skull once in a while until he’s… gone.